TORONTO, BOSTON, September 17, 2018 – Brizi Inc., a Toronto headquartered tech company that lets anyone tap into nearby cameras to capture group memories at iconic places, has closed a round of seed funding for $2.5M. The round was led by 2EP, known as one of the early investors in Harmonix (GuitarHero, RockBand). The financing will be used entirely for R&D, growth, and market expansion — to anywhere that group memories take place.

Initially, Brizi recognized a large opportunity in sports, today licenced across the NBA, Grand Slam tennis tournaments, and European football. Brizi helps groups of fans tap into a remote camera experience that they control from their phone web browser. Fans tap in their seat number, a robotic camera pivots to find them, and they see themselves on their phone. They then have 30 seconds to pinch and zoom to get everyone in the shot. A branded overlay is added to the photo, and can be shared on the fan’s social media.

For rights-holders, this is a new type of sponsorship asset that transforms regular visitors into micro-influencers. Additionally, data and analytics are made available through a fully-featured dashboard, that can help clients improve their visitor experience, and attract new customers.

Brizi was part of the 2017 Techstars Boston cohort, which helped jumpstart growth for the company. Mentors from the program made direct personal investments in Brizi, which was otherwise bootstrapped until the current round. Brizi was also the 2017 SXSW Accelerator Winner in the Sports category.

The technology has recently been adopted beyond sports, at an iconic landmark, overlooking the Washington Monument.

“Let’s face it, we’re now in a world defined by experiences. We know traditional rights-holders like sports teams are still struggling to fill their seats. Brizi is amplifying the value behind every experience, adding a new layer of camera-enabled memories that make those moments more meaningful.” Anna Hu, CEO & Co-Founder of Brizi.

“We’re pushing boundaries in human-machine interaction, computer vision, and in the near future, AI as well. It’s particularly exciting to work on redefining how people interact with cameras outside of their smartphones, and building technology for seamless real-time control particularly in harsh network environments”, said Sami Dalati, CTO & Co-Founder of Brizi.

Brizi lets anyone tap into nearby cameras to capture group memories at iconic places. Licensed across iconic sports venues and landmarks including NBA basketball, European soccer, Grand Slam tennis, and at the Washington Monument, Brizi is creating a new economy enabled by Brizi Moments to engage guests, offer a new form of revenue stream, while collecting valuable user, population, and imaging data. 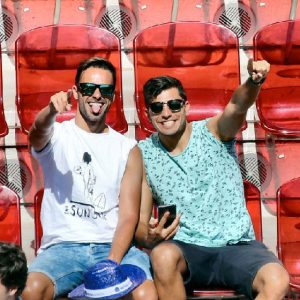